Hi All:
Once again, the low tech Haitian Donkey wants to send out just a few notes of update. The rest of the trip went well, we had no rain and thus could make the trip back to Port in the wee hours of Saturday with our bunch of luggage remaining dry on the roof. Per usual, our teams often bring stuff back from the Centre Lumiere, the center located within walking distance of the hospital where our otherwise destitute ladies make beautiful products from scratch on supplies purchased and sent to Haiti from the US, which we bring back here and thus raise funds to continue the ministry. The ladies have Bible teaching each day and many become believers in their years of training there. The center has had a fair amount of damage from the hurricanes and is still being repaired/refurbished by Caleb and Olga, but they are going to have 3 USA sales in the next few months. The first (the flier is redone below) will be Friday the 3rd of November and Saturday the 4th in Grand Rapids at Bella Vista Church. The next will be in the Bluffton area a few days later. Thus, Evert and I took 4 large suitcases home full of supplies for here and Zella had 2 more for the Bluffton area, as she teaches there.  So, wanted to be sure I got the news out to those who would be interested in supporting this ministry or getting to know more about it, as, like the hospital, we reach out to people by helping them with their physical (financial and medical) needs and then we get to tell them about their spiritual needs of Christ. 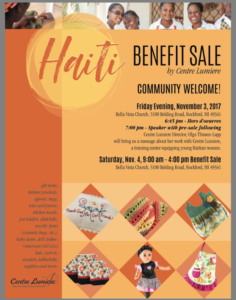 We arrived home without trouble, though the chilly reception we had in Grand Rapids (in the 30’s while the 1 am departure was in the 90’s with 95% humidity, even I don’t wear more than scrubs and flip flops and love it) was a bit of a shocking return to reality. I continue to be amazed and thank the Lord for all the crew was able to do during our week of service there. Miss Lisberthe, our OR head nurse, and Miss Catherine, the head nurse for the rest of the hospital, asked Tabitha’s sister to come back a couple times a year to help organize things in the storage rooms, so it was profitable in that aspect also. We have a lot of the downstairs of the hospital cleared, so are well on the way towards getting ready to tile the downstairs of the hospital, though the teams in early 2018 will make considerably more headway on getting the walls and floors ready for that huge job. The first container arrived in less than a month and a bunch of supplies are stored, the second is on the way already.  Dr. Luke will come this weekend for the November surgical week, also Duane and his crew as well as Dr. Luke’s nurse mom, plus Dr. Jo Marturano (psychiatrist) and Beth Newton, so they can work on the psychiatric clinic as well as the surgery aspects. We would appreciate prayer for wisdom for these tasks to be done smoothly and in a way that glorifies God.  Also for safety for the teams as protests continue as the country becomes more chaotic without much law enforcement (with the UN pretty much gone).

Lastly, it is once again headed towards the end of the year and we would like to ask those who have had an interest in the “rice and goats fund” if they would feel God leading them to contribute to this again. In the 7 years we have been able to do this, it has been a great source of encouragement to our employees and myself. As funds allow, we start at the lowest paid employees and share the benefits with all those possible. The Haitian Goude has not done so well on the international scene and, since so much of Haiti is dependent on goods imported from outside, inflation has been rising at a runaway rate. This has especially hit the lowest paid employees as their food costs are such a large part of their living costs. We help them as our funds allow, but this special event is such a great encouragement as it is given as we remember the great gift that God gave us at Christmas for our salvation and eternal life. Again, for those concerned that the gift of the goat will become Christmas dinner, that is not likely to happen, as the goat is too great an investment to eat in a short period, as we don’t have refrigeration to keep the meat safe and so it is kept to grow, reproduce and then be sold to market if a financial crisis arises (medical or other serious event).

The contributions can be sent to either place, designated for the “Rice and Goats Fund, Haiti,” with the check written to the first line of each address:

Hi All:
We appreciate all the prayers and support we have received on this trip. As we said, American, understandably, cancelled all our flights, but Delta graciously took us in and, though the plane was full, they told us they would swing out into the Atlantic and give Irma a wide berth. They did exactly that and we arrived in Port only a bit late but in good spirits. We piled ourselves and our baggage in the Kia and took off. A bit into the trip, Jean Eddy told me that he thought I needed to buy a new battery as he had trouble starting the truck at the airport!! Yikes. About half way home, it became evident that we were living on borrowed time, especially as it got darker and we were trying to not run the battery down further. A bit short of the 3/4 point, the truck died altogether and we were stuck on the side of the road. We tried calling but Dr. Moise was not available for a bit and he doesn’t have a vehicle. We did the usual Haitian flares, taking tree branches and spacing them along the road to warn approaching traffic of our misery. Duane tried all his magic tricks to get the truck going, though was hampered with not many tools, no spare battery and darkness.

By God’s grace, we finally were able to contact Dr. Moise, who was able to borrow a car from one of the pastors and his brother in law went with him, carrying the battery to the second generator (the first of course was running). What a welcome sight to see these two brothers and we were soon on our way again to the hospital, again arriving a bit later than expected but thanking the Lord for His provision, as not much is open at night in Haiti and especially not on a Saturday night. Dr. Moise’s sister (the wife of the gentleman who drove the truck) usually makes us a huge meal of beans and rice, fried fish and some vegetables. We always eat a bit but the 4 men from Bible Believers Church in Lowell ate like they hadn’t had a meal in a week. Their enthusiasm is contagious. They went to the Sunday School program and then the Wrays and thoroughly enjoyed themselves. They have worked like slaves (of course, they have the Egyptian Taskmaster in Duane) and have finished the roof on the house they are doing.

Duane has his hands full of tasks, 2 of the 4 water tanks on the roof are leaking, one has a crack and spurts water. We don’t always understand Brenel, we would have expected him to let us know this on Monday morning, but not ’til tonight. One never knows the mind of the Haitians. My OR girls told me today they only had 2 months of spinal and Ketamine left, again, it takes about 5 months to get a new order from Amsterdam. Sometimes the bald spot on my head slowly grows. The government also decided, that we need to increase the baseline salaries about 200%, due to the runaway inflation after Hurricane Matthew, but where do the funds come from to do it? Surgery has been decent, I am a bit feeble, running a low grade temp despite increasing my Levaquin to 1000 and taking Tylenol each 4 hr. Am sleeping 10 – 11 hours a night, so appreciate prayer for God’s healing of my infection. Am thankful that I am able to work, albeit a bit less than I would like.

So, we are plugging along well, me a little less than the others, but the boat is floating and we are thankful. We are hoping that Jean Eddy comes back from Port au Prince tonight with the alternator, as none available in Cayes. We got a new battery and tire, but the problem seems more serious to my talented buddy, Duane. He never ceases to amaze me with what he can do.

Thank you so much for prayer for us all, including the stumbling Haitian Donkey as we try to serve HIm faithfully in Haiti.

Hi All:
Just a quick request for prayer for God’s wisdom as to how, if at all, to proceed with the possibility of Hurricane Irma gearing up to cause havoc also. The poor people of Texas et al are still recovering from the aftermath of Harvey and Irma peeks around the corner with the possibility of even more force and destruction. American Airlines states that they suggest alternative paths if that is possible as both Haiti and Florida are threatened by the upcoming storm. However, they do underline that we are responsible to be there unless they cancel the flights. Yikes.

Since we are 9 on this team and that includes Ed Bos with a bunch of lab equipment to replace our “outdated” lab tools, it is harder to flip around and try to find new flights, plus there is so much up in the air. So, we are asking that you join us in prayer for God’s wisdom and direction for us all, so that we are neither foolish and take unneeded risks or waste a good opportunity to serve Him there in Haiti next week. As I have to fly straight through with my TPN (so that it doesn’t warm up and become worthless) this complicates the decision somewhat as getting stuck somewhere means that the expensive “lunch” that keeps me going and is such a lifesaver will be wasted.

As always, we trust that our Lord who knows the end from the beginning has a perfect plan for the situation, just pray that we, his imperfect servants, will ascertain His will and follow it for His glory.

Will keep you apprised of changes as they develop.

- The Word of God as our final authority. - Dependance on God evidenced by prayer and living by faith. - Willingness to sacrifice for Christ. - A Spirit-controlled life. - Godly relationships and interdependence in ministry. - A sense of urgency in ministry. - Effective communication in evangelism. - The certainty that God desires to use any life. - Excellence in what we do.